After 4 months on the road to the day ,19 countries ,3 ferries and 27,000 km our arrival in Japan felt like our little adventure was nearing the end .How wrong was I ! 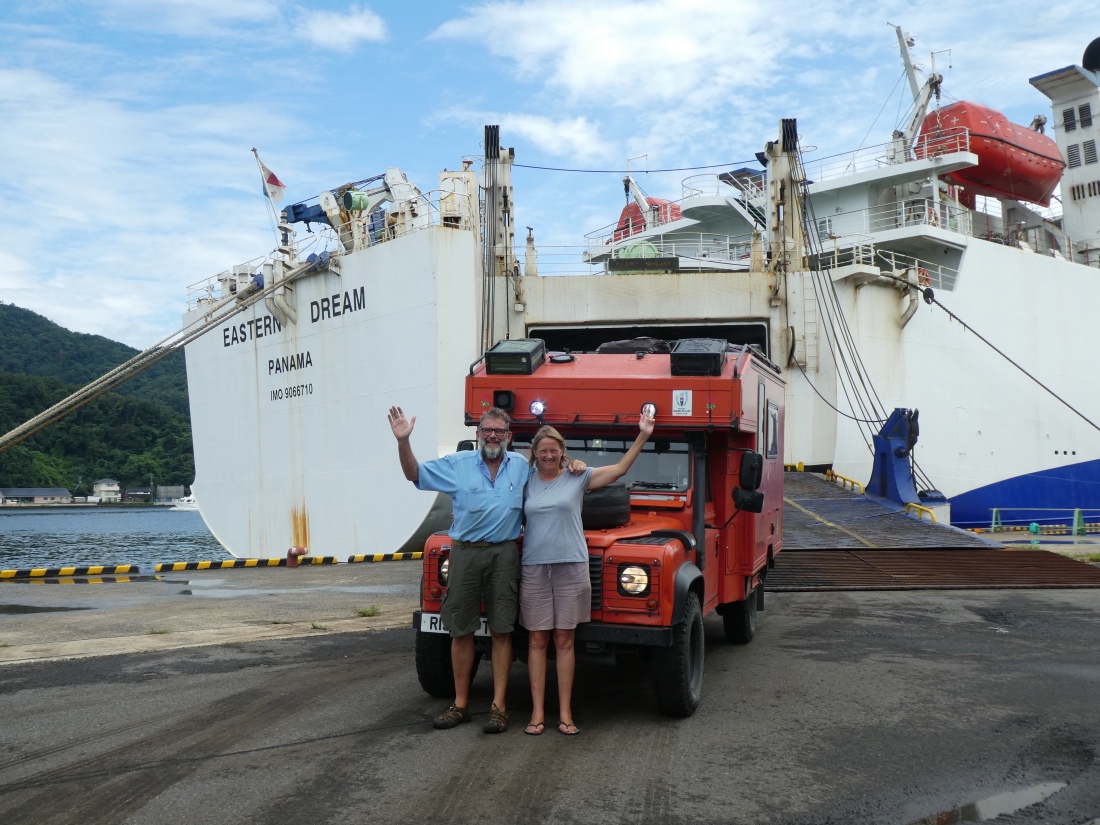 Our arrival in Sakimento in South western Japan was great with the heat and humidity it really felt like we had made it!So with time on our hands we set off on a leisurely pace , about 25km to our first wild camping in Japan

Not a bad spot for the night and a swim in the Pacific before breakfast!

The humidity eventually reached 100% ! In other words it’s raining! Really heavy, warm drops as big as golf balls! But as always Amber was the best place to be! 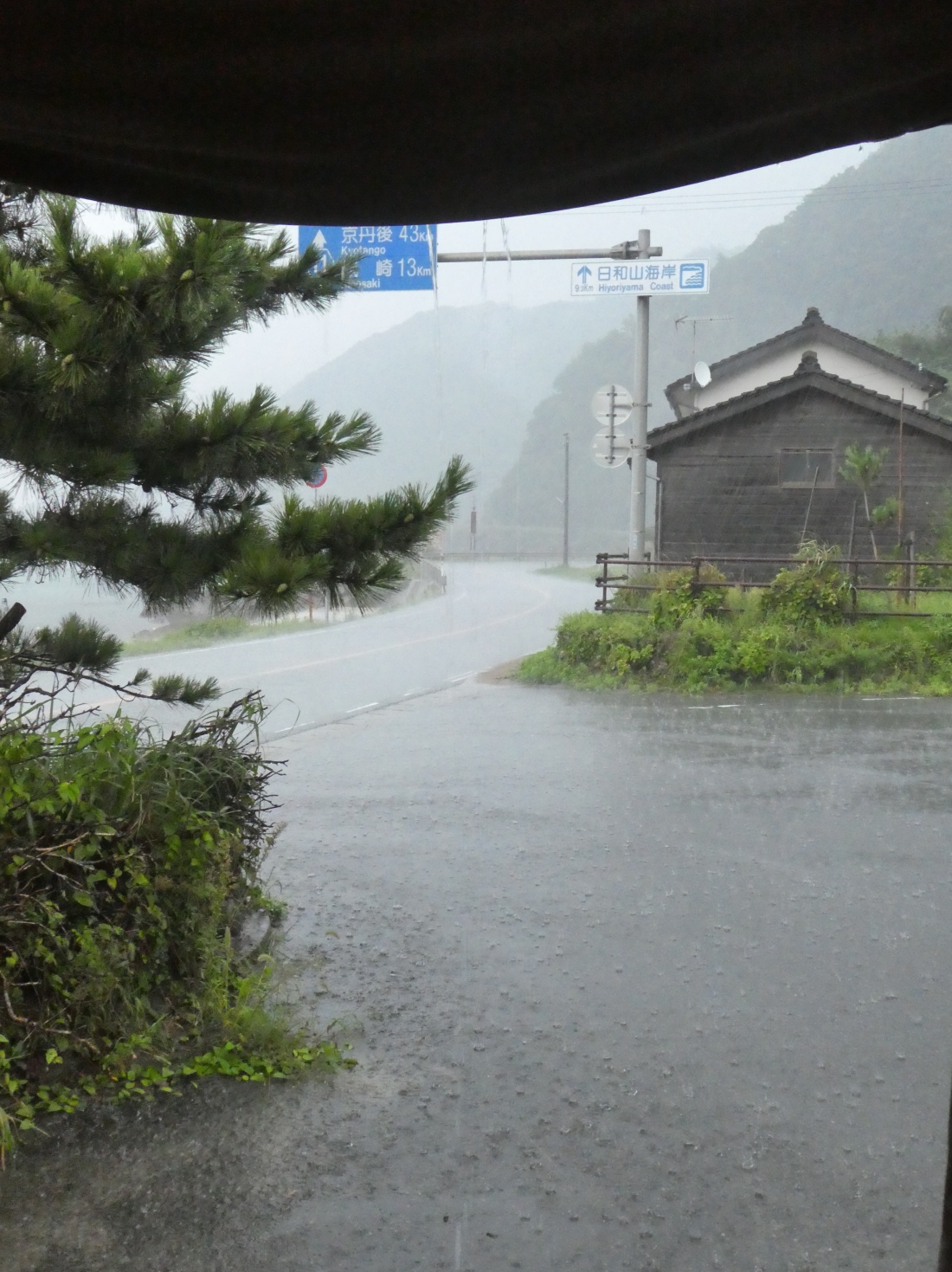 Another day another beach this one with squeaky white sand and a natural Onsen filled from a hot spring .Heaven on earth!

Followed by an ice cold shower from a stream! 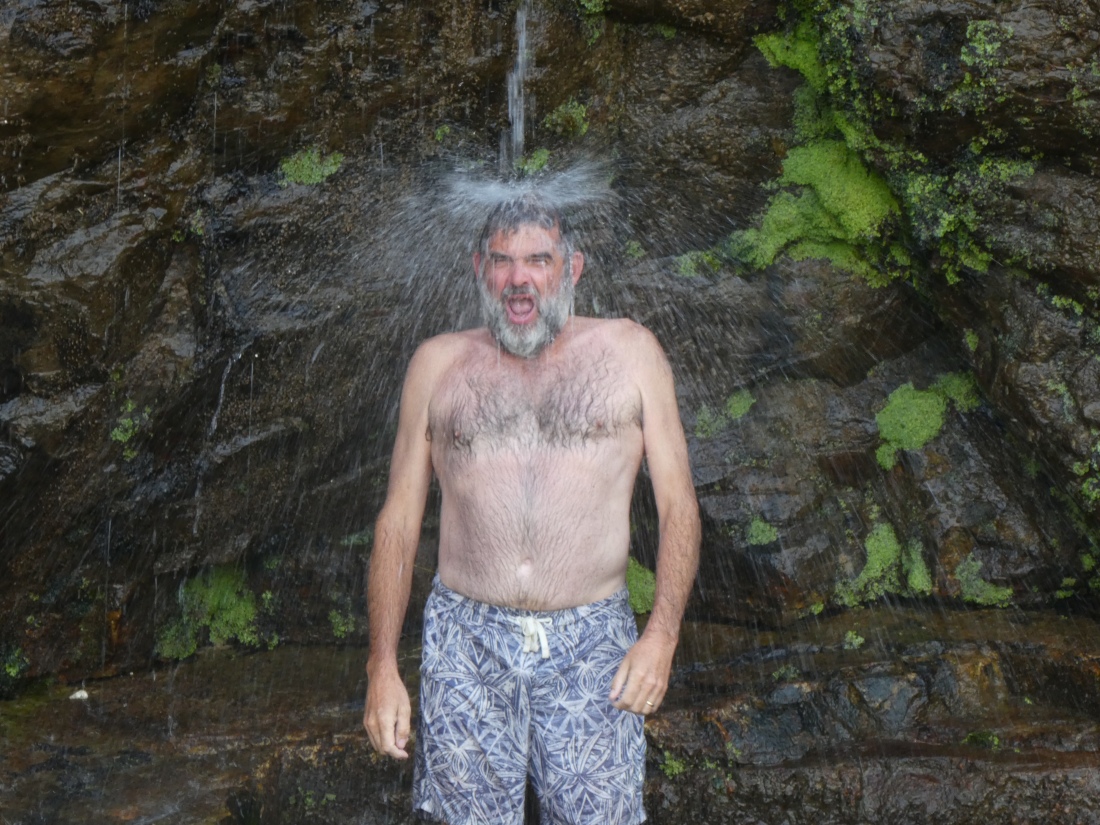 And another swim snorkel

Just in case you were missing some tractor action check this little beauty out 60 hp on rubber tracks! It’s blue but not paying my pension but worthy of a stop en route.

Met up with our friend from Culmstock Jude Zebedee who had just completed a section of the “celebrate the Austin 7” having travelled in an 80 year old Austin 7 across eastern Russia with Chris Blakley who we hope to meet up with at one of the games.

Exactly 27,835km from Home our Tokyo hosts, my brother Simon, his lovely wife Tomoko and my nephew Kai who I’ve never met before welcomed us with a bottle of champers and a tight parking spot with a couple of inch’s spare Amber fitted in perfectly if a little bit of a surprise for the neighbors!

We arrived at Simon and Tomoko’s house just hours before Typhoon Krosa .We barely managed to sleep with the back doors open with all hell breaking loose outside but such an experience with a force of nature so strong it managed to knock out all trains in Tokyo for the next day! 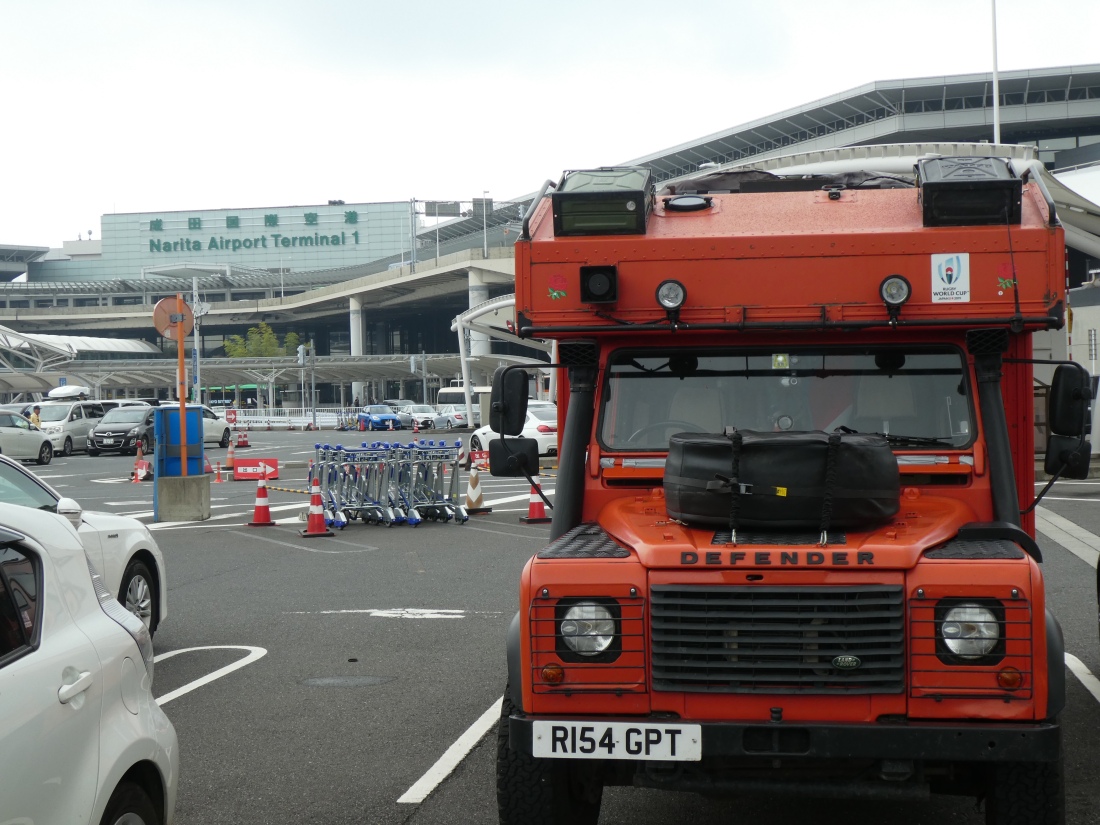 Next stop Narita airport to pick up Hazel,Douglas and Alex

Hadn’t seen Hazel since March as she’s been traveling around South America and Doug and Alex since early May .Awesome to meet up again! 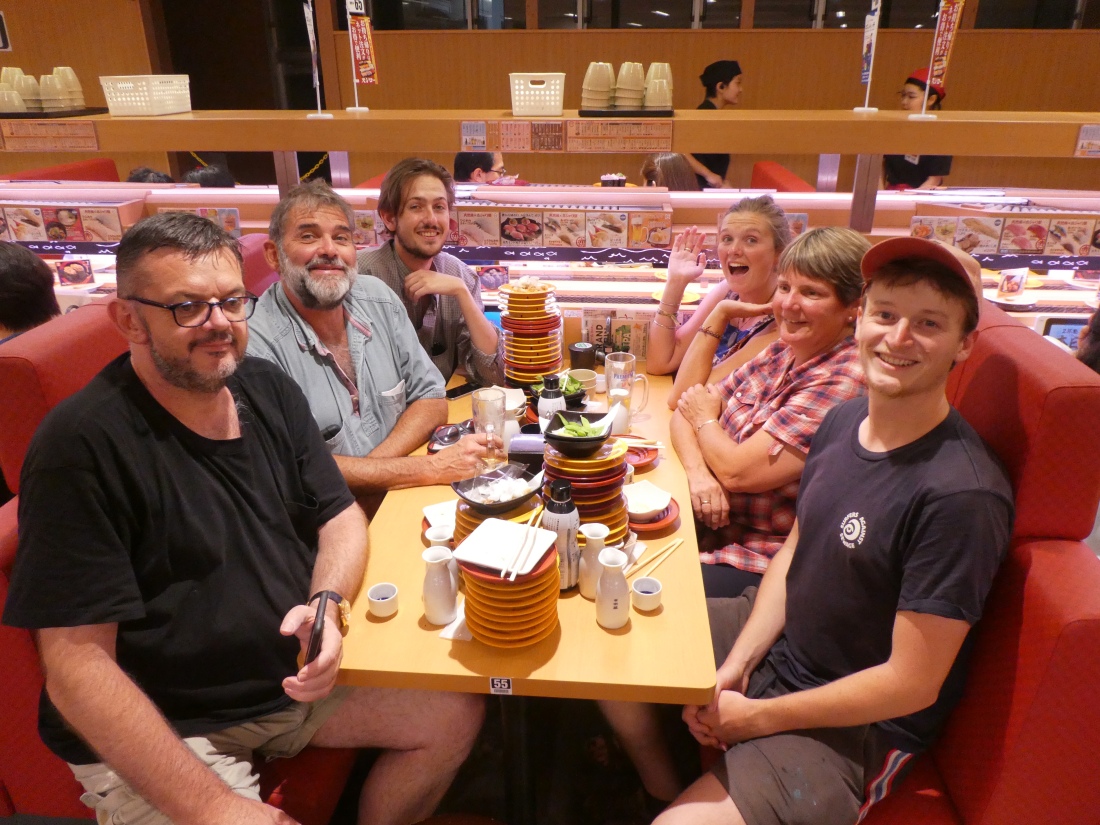 First experience of a conveyor belt Sushi restaurant and yup that was just Doug’s pile of plates!

Next official duty delivering some Otter bitter to the British ambassador Paul Madden who coincidentally originated from Ottery st Mary a few miles from home! We were given a tour of the embassy which was a bit surreal as only a few days earlier we were wild camping in the woods! 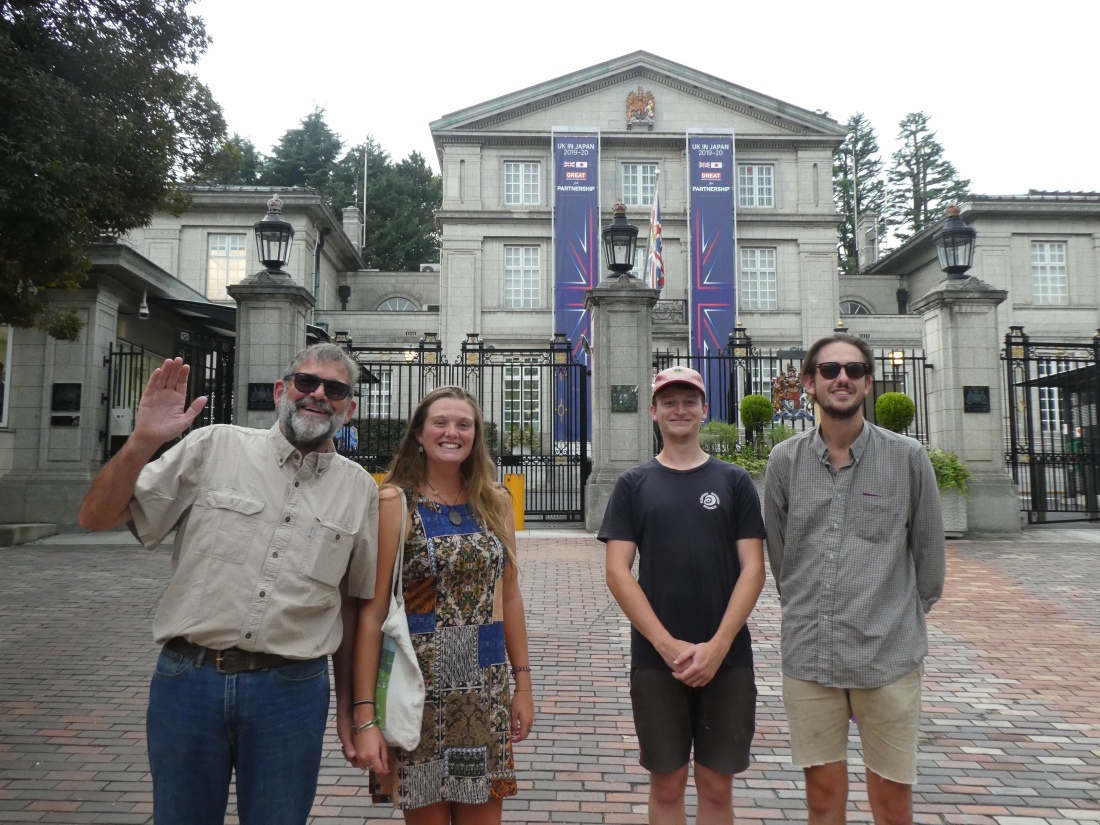 The British ambassador was so impressed he said he would like to place an order for embassy events! Wahoo! Get my commission ready Patrick (owner of Otter brewery) 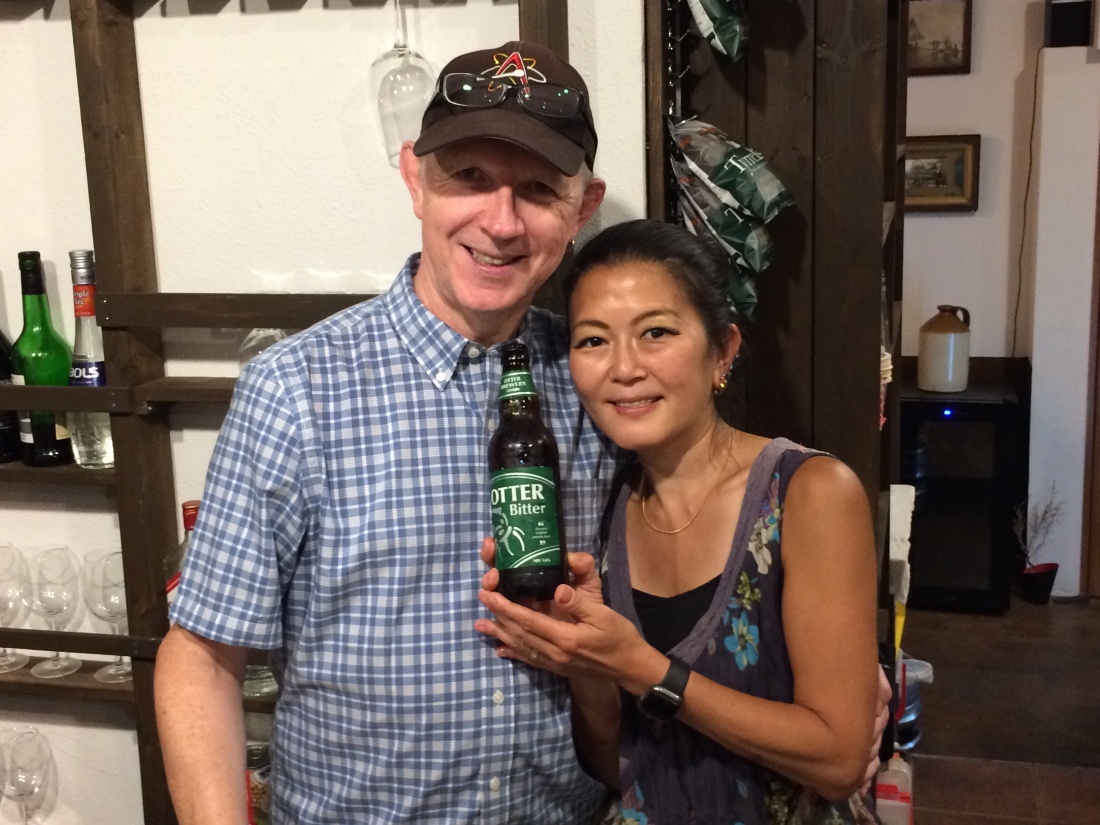 Also managed to leave a sample with David and Maki the proprietors of a great English themed pub in Tokyo The Hole in the Wall .Fab place with great atmosphere and cracking English grub! Mmmmm Pie n Mash Yum scrum in my tum! If you are in Tokyo and need a bit of English nourishment check this place out.

The big day arrives! 60 years old who would believe it! 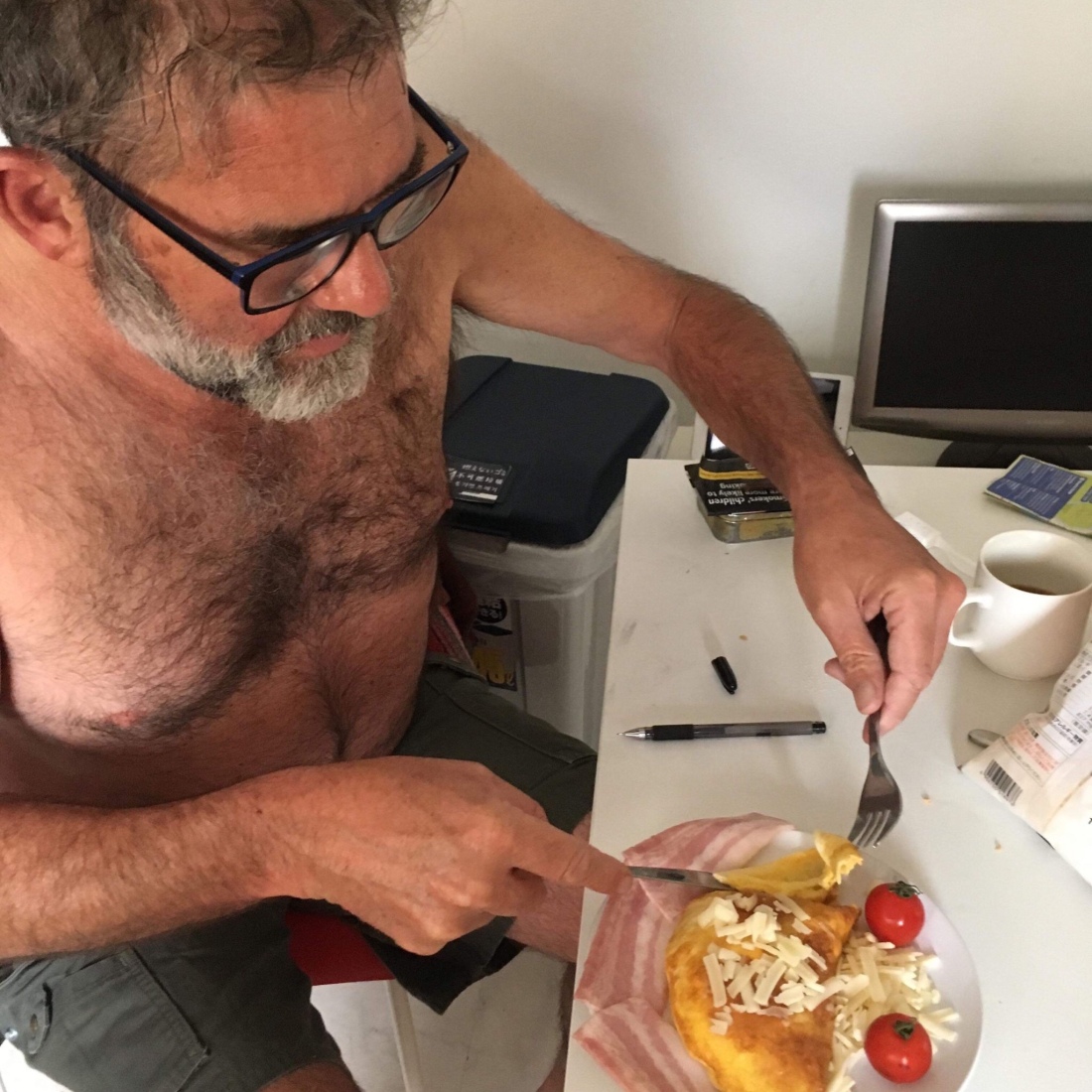 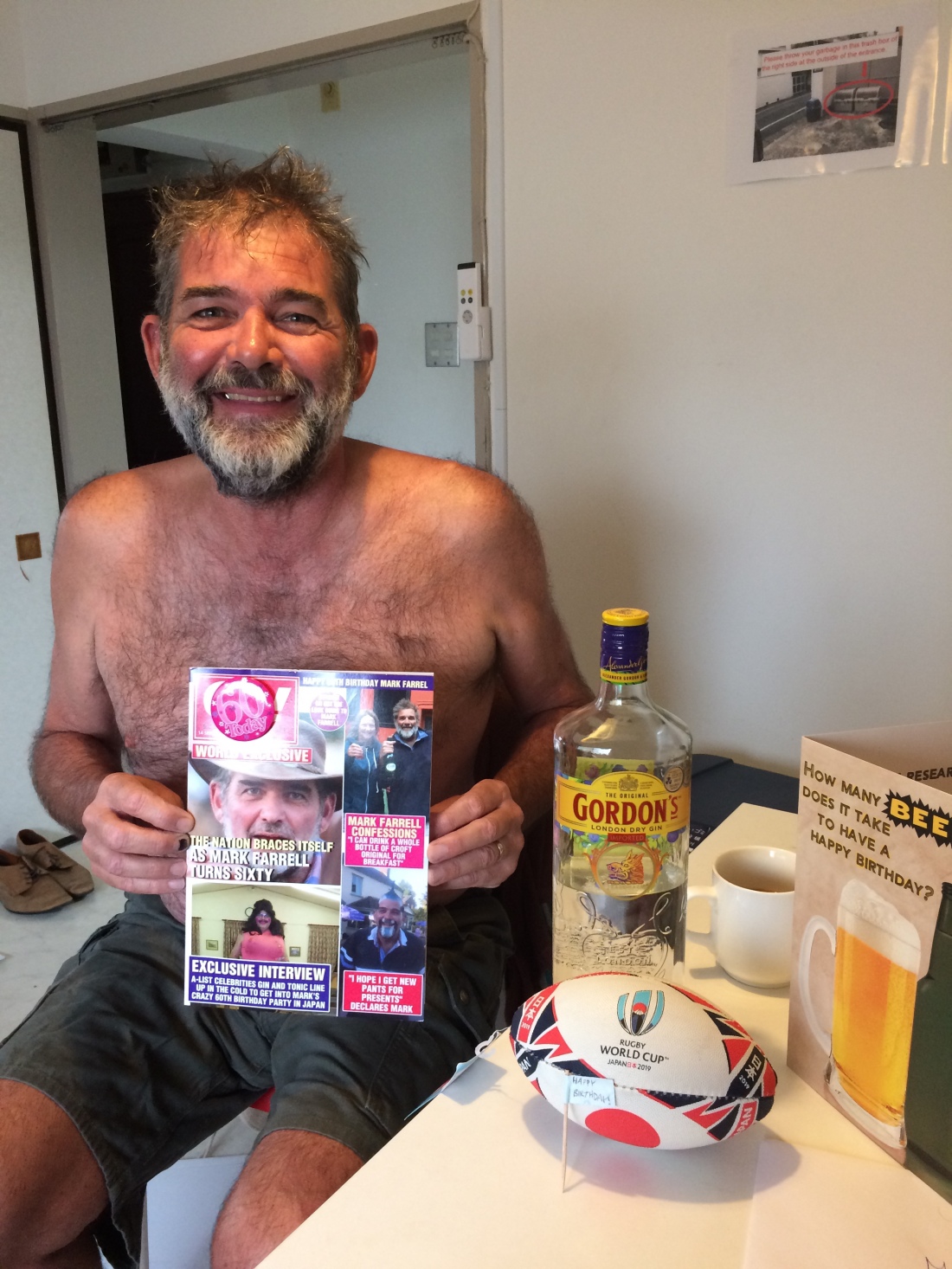 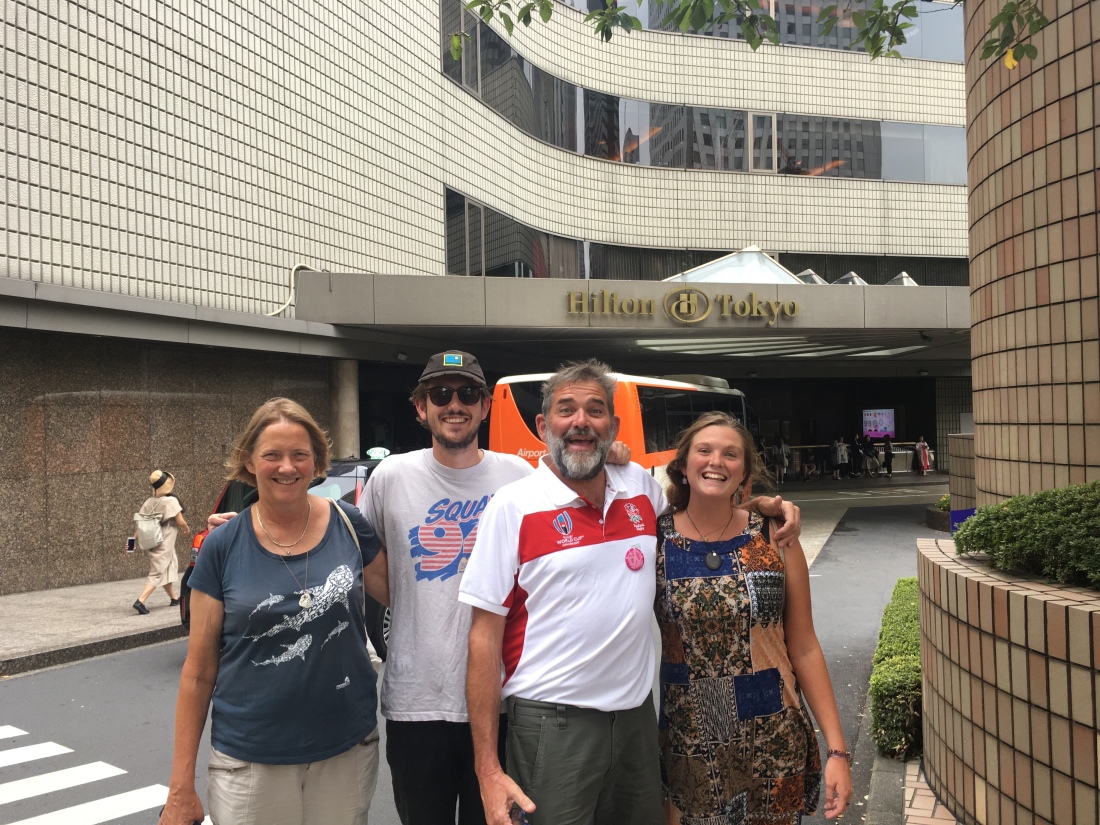 Decorations done in style thanks chums!

Just happens to be Tokyo towers 60th birthday as well! 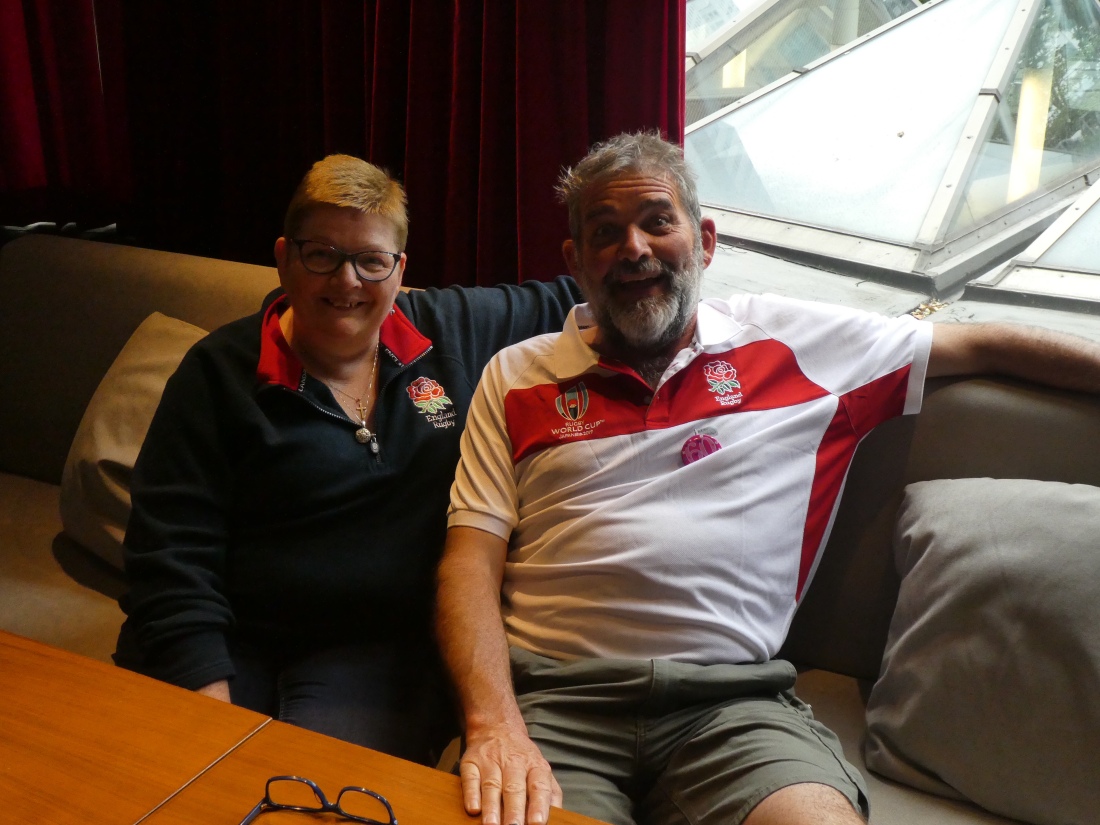 And then a most incredible Japanese meal in Gonpachi restaurant which was the inspiration for one of the fight scenes in the film Kill Bill .

The evening ended up being invited to a rugby themed party which is all a bit of a blur so you’ll just have to try and imagine the rest of my Big Day. Thank you everyone who made it such a special day and all the birthday wishes from all my chumlies !

Leaving Amber at Haneda airport to fly to Hokkaido for England’s first game.

Hello chubby chunkster our new home for five of us for the next week whilst we tour around heading for Sapporo and England’s first game against Tonga!

8 thoughts on “Japan,Kids,Birthday and Stuff”