As Amber had behaved herself impeccably the two weeks I had factored in for breakdowns and prolonged border crossings etc were now two weeks spare time, so we parked up in Vladivostok and did some sightseeing,shopping,laundry and planning our next moves which were to take us In search of some good beaches we had heard about south of Vladivostok. However Typhoon Korsa had other ideas making our little Vladi vacation a wash out with torrential rain and strong winds.this picture don’t do it justice but will be a reminder of Bloodyvostok -oops sorry I meant Vladivostok

One of the original Trans Siberian trains which was given to Russia to help the war effort,Lenin and friend and boat tour around harbour!

We did manage to park up on a deserted campsite where we met Sasha the campsite clown who arranged for us to have a Banya, a Russian Sauna complete with daft hats and birch twigs, as a parting gift we swapped an Exeter chiefs hat for these beauties !

Also managed to give Amber a wash in the rain ready for South Korea! 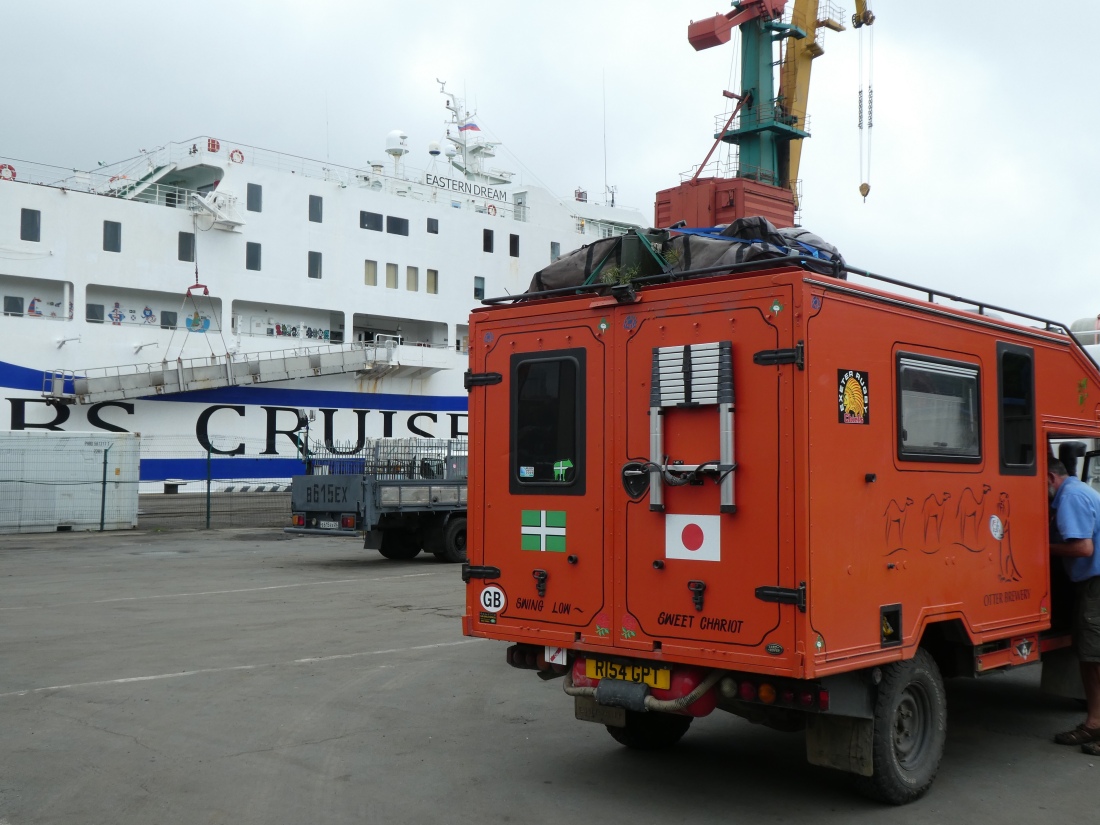 Just waiting to load onto ferry the Eastern Dream 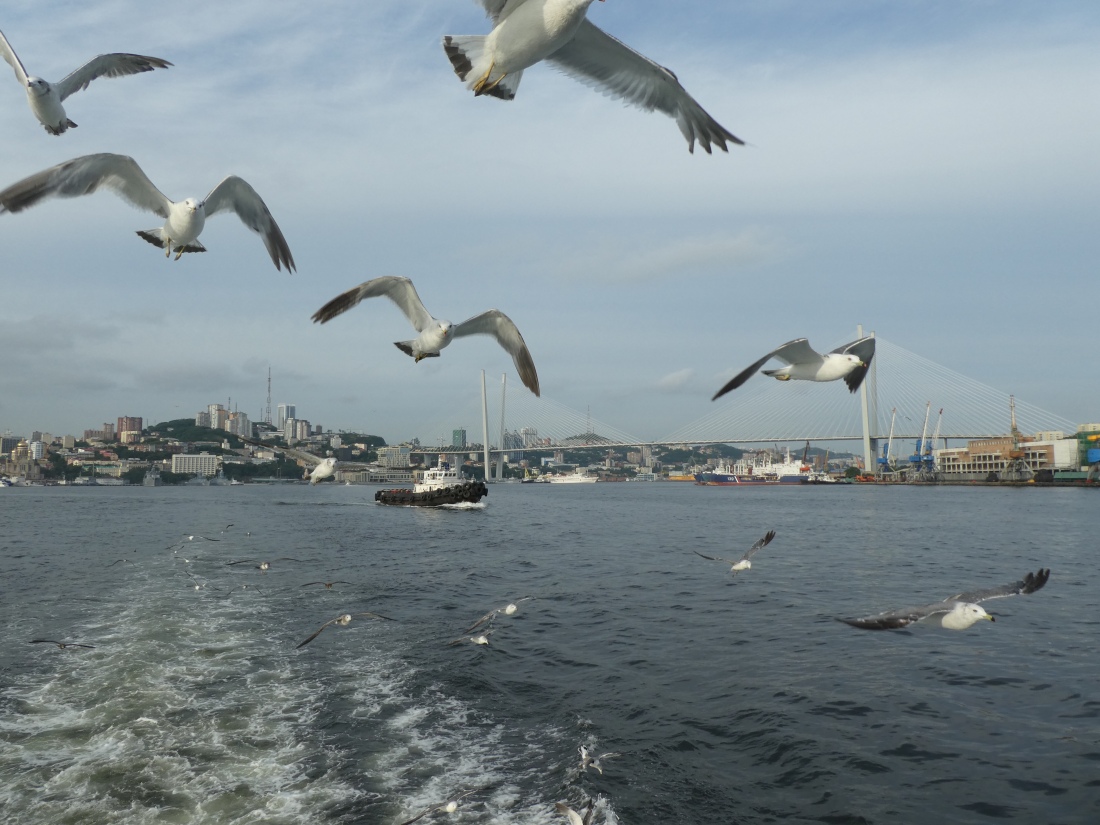 Good buy Vladivostok I hope you dry out sometime apparently they have had just five days of rain free weather this summer maybe that’s why the locals were so glum!

Our bed on board basically the floor with a thin mattress,rather be sleeping in Amber.

Our arrival in South Korea was an absolute pleasure with happy smiling officials and customs officers who could not have more helpful offering iced coffee whilst attending to customs procedures and paperwork ,what a contrast to some of the other border crossings we had encountered,and finally a beach side parking spot for the night half an hour north of the port .Warm water,sunshine and golden sand now we could relax finally! 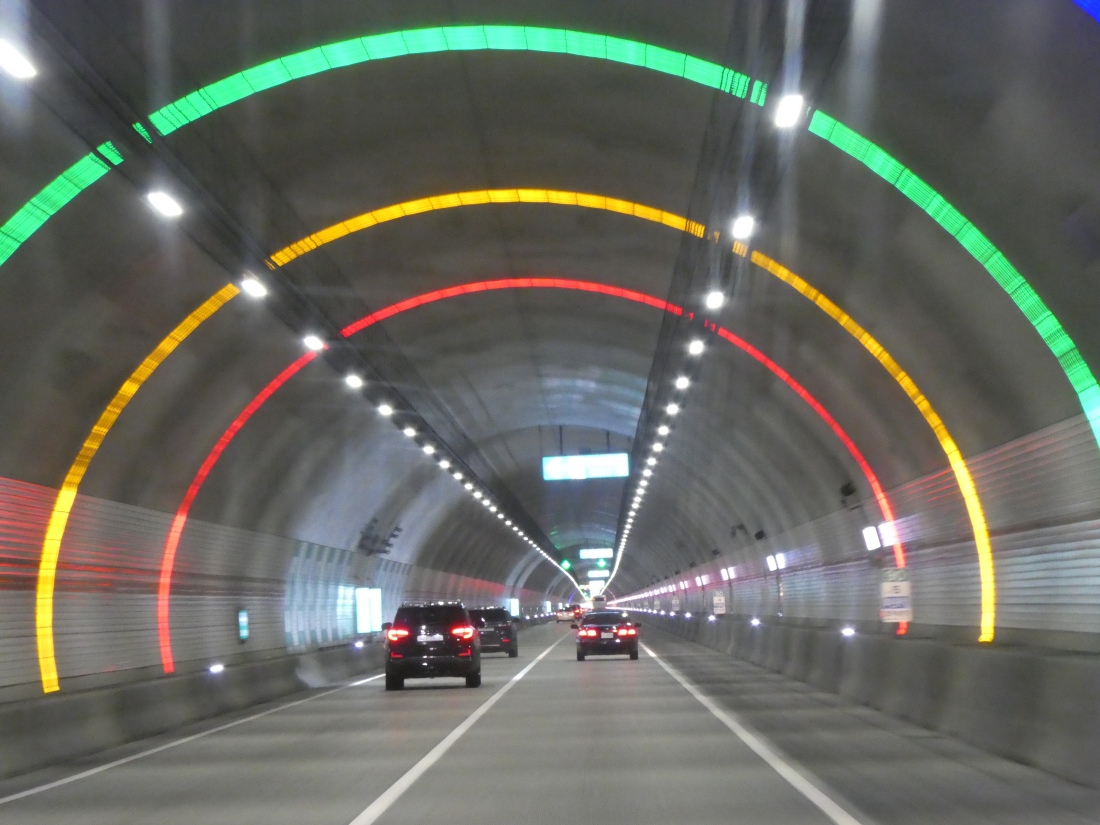 South Korea is a modern hi tech country with fantastic roads and hundreds of tunnels some light up as you drive past with flashing warning lights and strange noises to keep you alert.

I had been advised by my brother Simon who lives in Tokyo that there have been a lot of anti Japanese demonstrations and riots in South Korea and that it would be a good idea to cover up any Japanese flags on Ambers rear end so out with the gaffer tape and job done the anti Japanese protests were against trade embargoes historical issues with atrocities carried out in the Second World War and other ongoing issues.

So even Derek the Otter had a little make over .Happy to say we didn’t encounter any issues except for seeing many large roadside banners advising the public to Boycott Japanese goods. 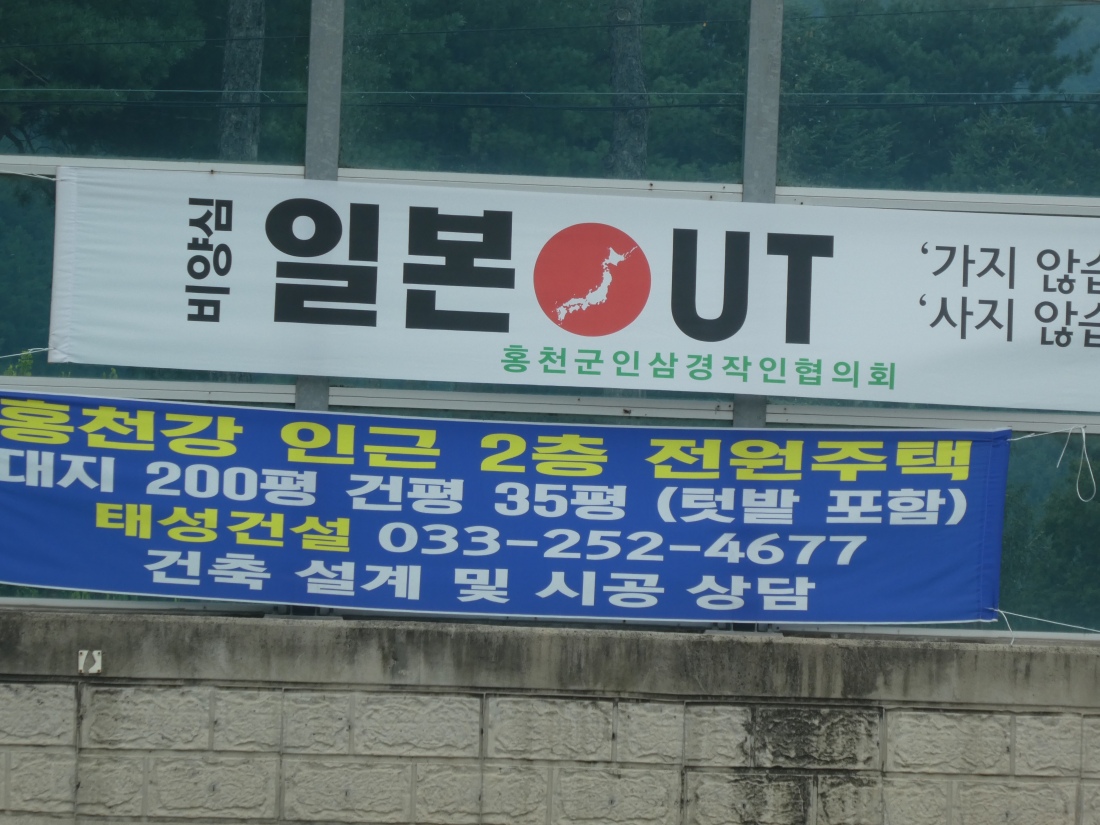 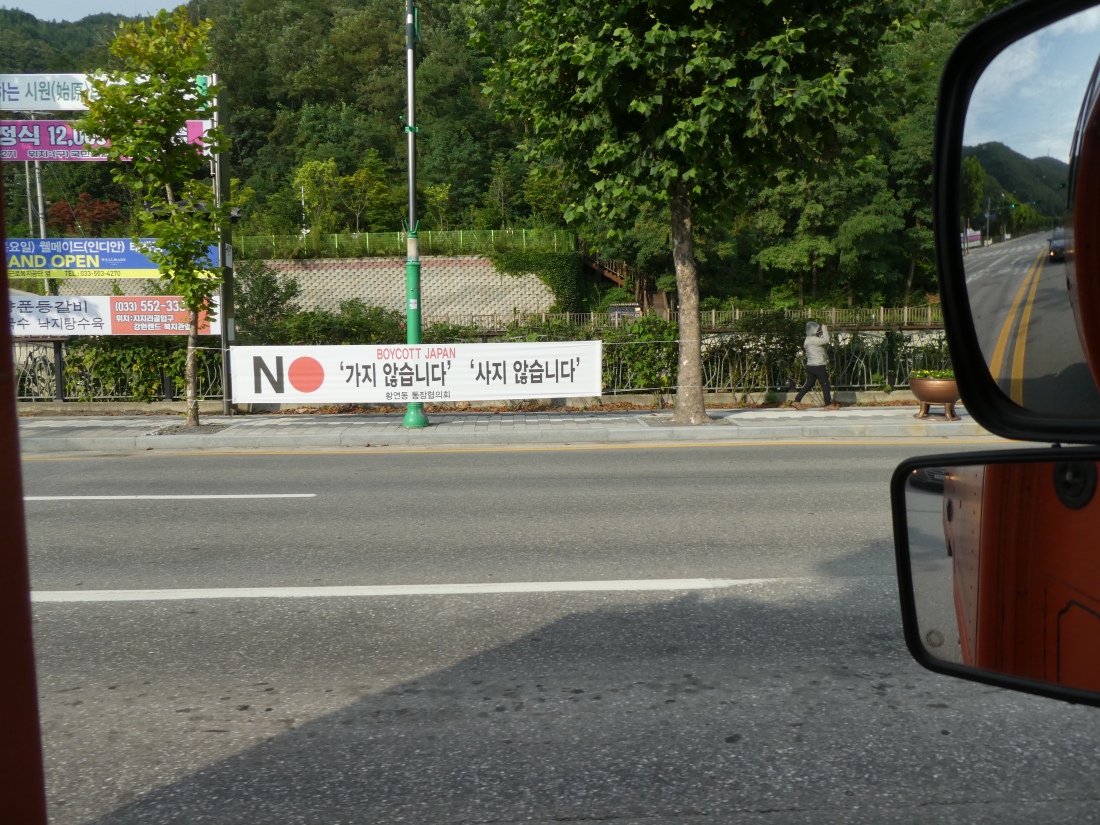 Next a visit to the DMZ the de militarised zone on the border with North Korea! 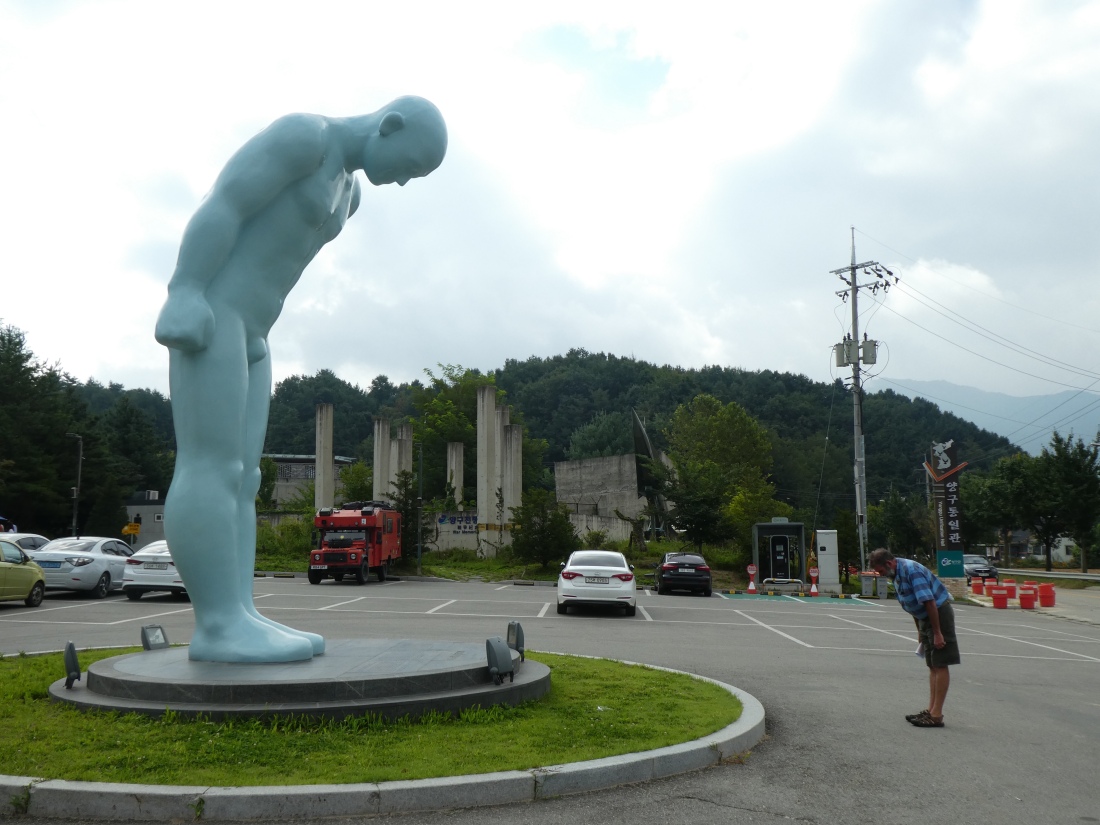 A Greeting from Greeting man ,a travelling statue who travels to places of conflict around the world instilling a peaceful attitude and an unarmed welcome! Very fitting in this memorial to the Korean War in the early 1950’s where thousands of people lost their lives but joint efforts from many nations including Great Britain managed to push North Korea back to the 38th parallel basically where they had attacked the south from ,taking approx 90% of the peninsular before the Americans South Koreans and other UN forces managed to retake this lost ground.

A memorial to those who lost their lives in a war where not one side won or lost but many lives destroyed .

in the middle of the DMZ is a no mans land with fully armed guards looking at each other over a strip of land varying in width between 1and 4 km with millions of miles of barbed wires , mine fields ,electronic sensors and electric fences which the North Koreans have had to switch off due to power shortages !

Now a tourist educational centre this is the entrance to the 4th tunnel ,which was discovered by the South Koreans in 1990 the tunnel was the fourth found and was being dug by North Korean forced labour to enable its military forces to invade South Korea this was still being dug whilst peace and reunification talks were being held !We entered the tunnel and took a small underground train ride where it was clear to see the drilling’s and excavations which had been carried out. Scary stuff as there is still a possibility of other tunnels yet to be discovered through this huge mountain range where Rocket Mans slave labour could still be burrowing away into the South. 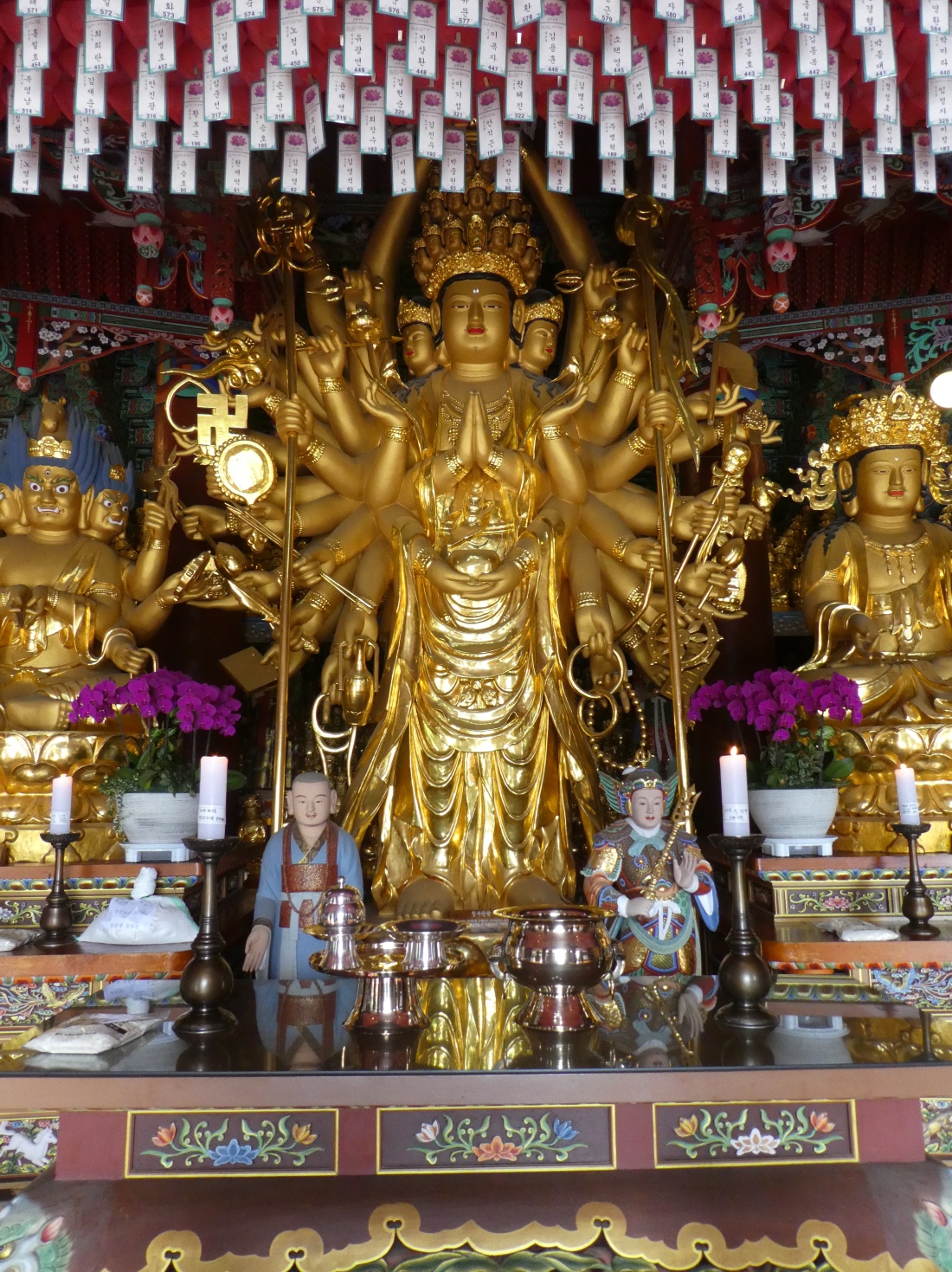 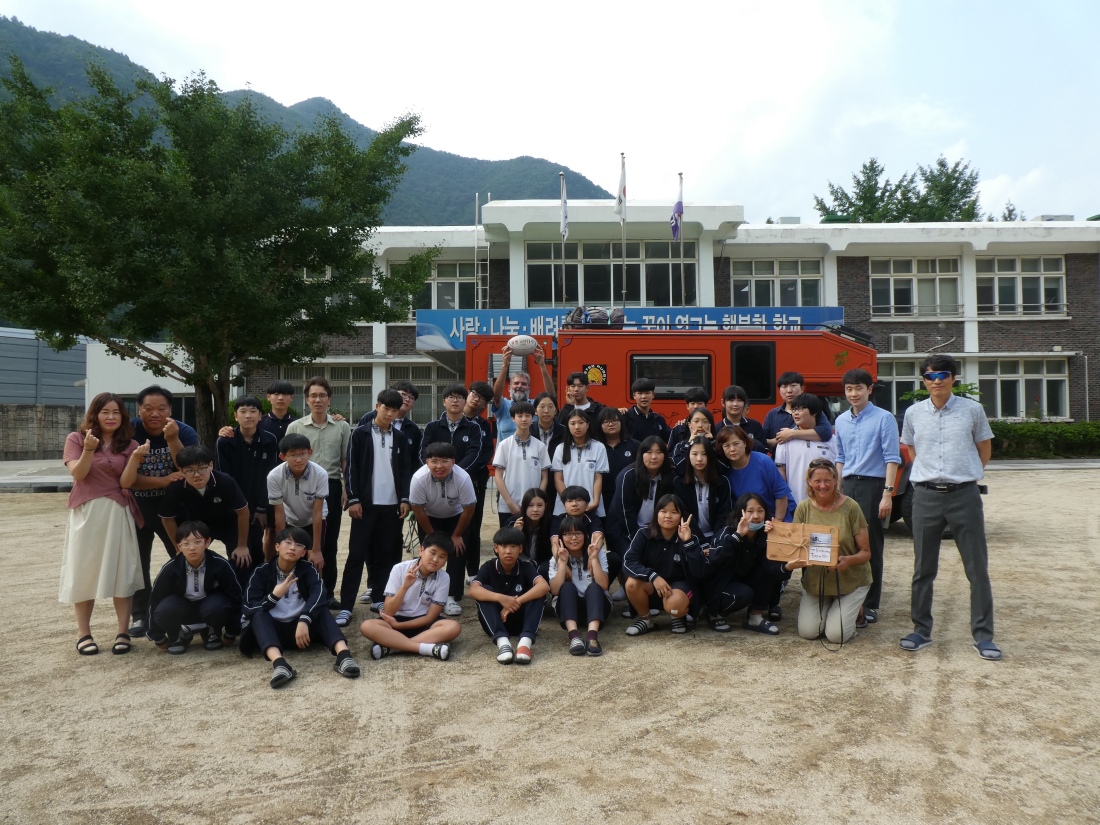 Whilst we were visiting the DMZ we met a guy who is the principal of a middle school in a town off our intended route .He invited us to visit and meet his students and staff so we made a detour through some stunning countryside and eventually found the school of 30 students and 7 staff. We talked about our trip and took questions from them in English which was a great experience and then gave them a guided tour of Amber and a game of touch Rugby which was great fun as they had never seen a rugby Ball before. 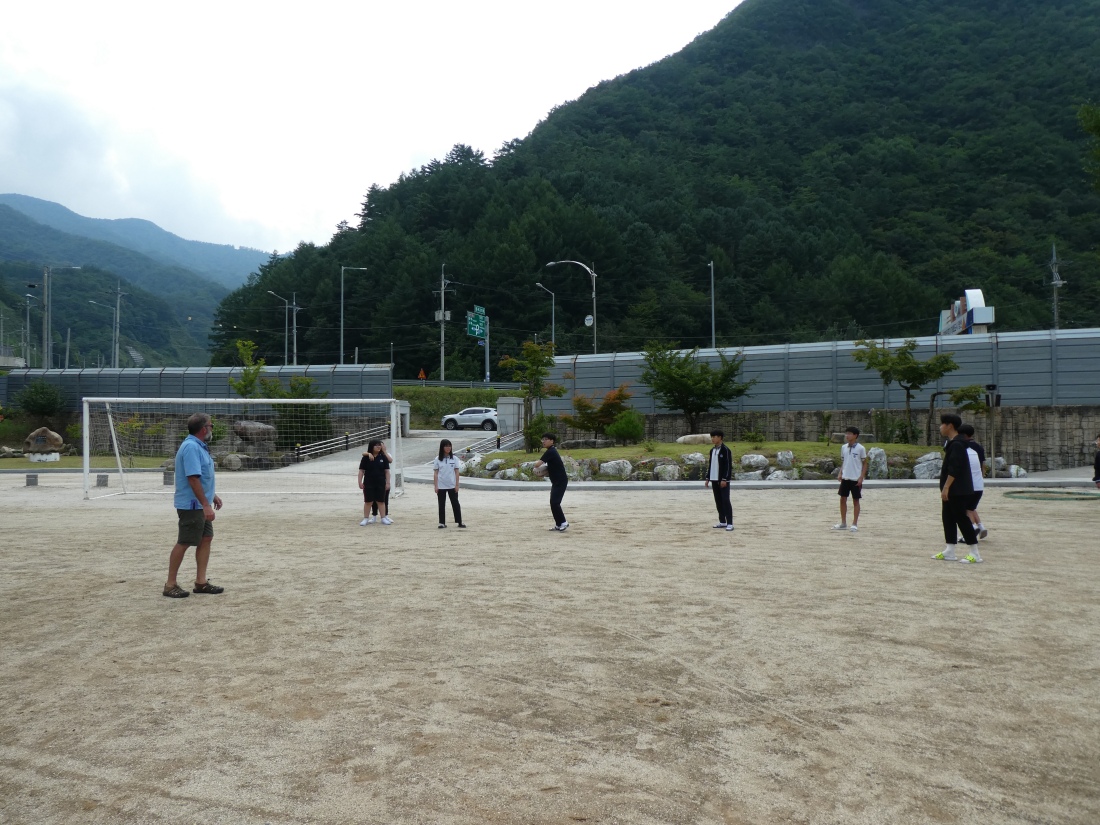 A great experience meeting the kids who were so polite, interested and good fun!

We were given a gift of a chopping block made from 400 year old local wood as a parting gift .Awww thanks guys.

Next an aerial zip wire which gave me the Collywobbles just thinking about it! 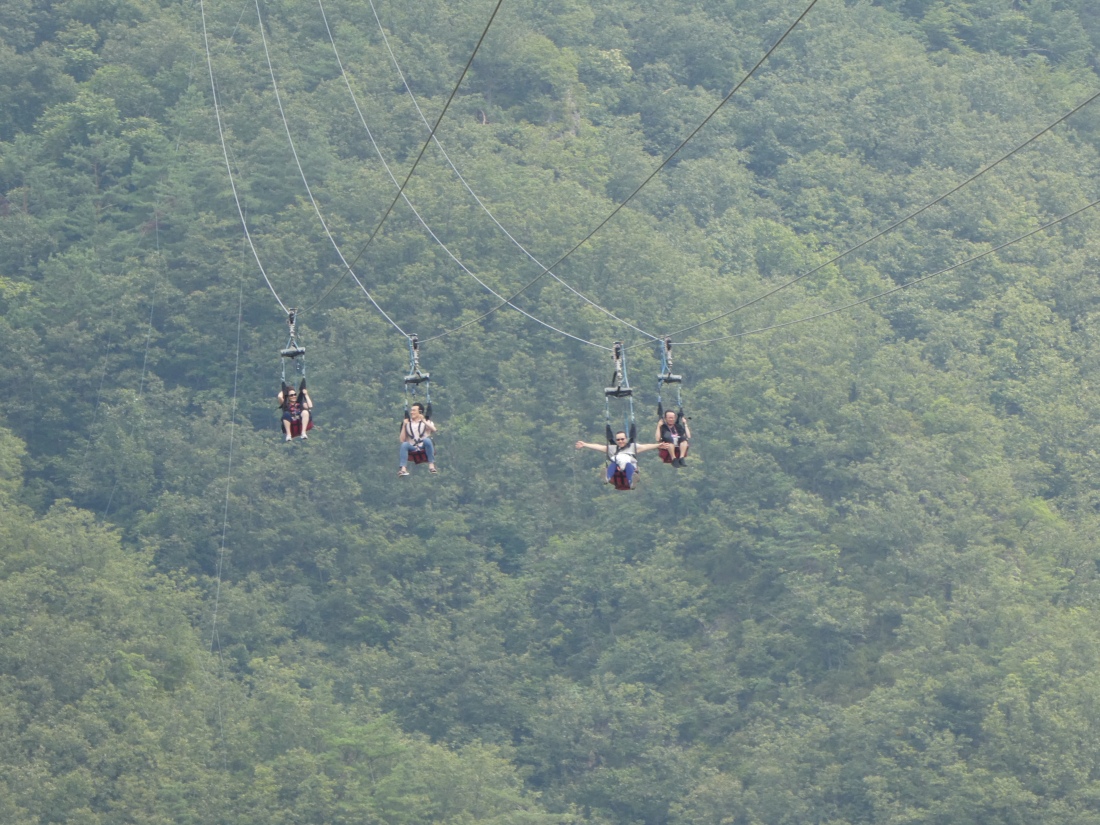 Loved it !just like a big kid screamed all the way down .You wouldn’t think I am to be 60 in a couple of weeks!

Our last supper on the continent a proper old feast at at fishing village Raw fish, Scallops and spicy fish stew Yum Yum in my Tum!

Back on the boat Japan bound Thank you South Korea it was a fab week! We will be back.

Thank you Simone for our Emergency Gin bottles, it wasn’t an emergency but it felt like a celebration was in order leaving the largest land mass on earth of Europe and Asia for the relatively small island of Japan, best G and T for a long time!

So the sun sets on Korea I wonder what’s install in Japan. 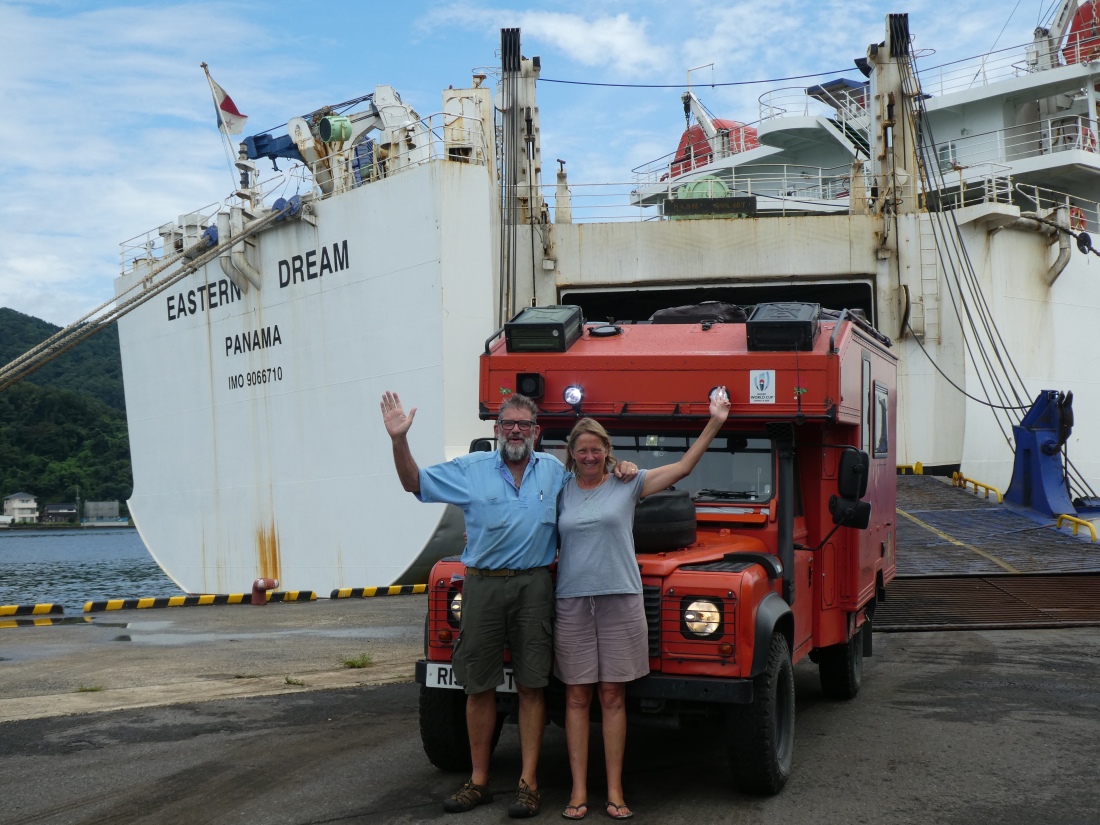 Next stop Tokyo and pick up the kids and then on to Sapporo for first England game!Come on England!