The second highest highway in the world!

Leaving Dushanbe with a happy Amber! Clutch sorted,water and diesel tanks full and fridge replenished with supplies.We’re off to tackle the Pamir Highway which has been one of the main objectives of the trip and one that has been constantly on my mind concerned about the route,the altitude and Amber of course!

I was once advised by an old work colleague “The time to worry is when you don’t worry” So full of worry and concern ,listening out for new noises ,smelling new smells,feeling new vibrations and looking out for leaks and general issues with Amber we progressed up and up through the fabulous Wakhan valley heading along the fertile valley floor checking out the local agricultural practices in this very poor undeveloped part of the world

These guys could win any ploughing match on sheer effort alone!

These were the military helping out with cultivation’s with a bit more technology and cow power!

Onward and upwards through the Wakhan valley through villages with children, teens, adults and old folk all waving at us with genuine smiles on their faces and a true welcome which is pretty awesome as we have noticed those with the least have been the most friendly !

Amber to the rescue! Waved down by a worried looking truck driver with a problem we soon realised that he was well and truly stuck in the sand and had been overnight as it was only about 07:00 am .Amber always a willing workhorse was hitched up and soon straining at the leash dragging the truck out with cheers from the onlookers who had gathered for the spectacle! 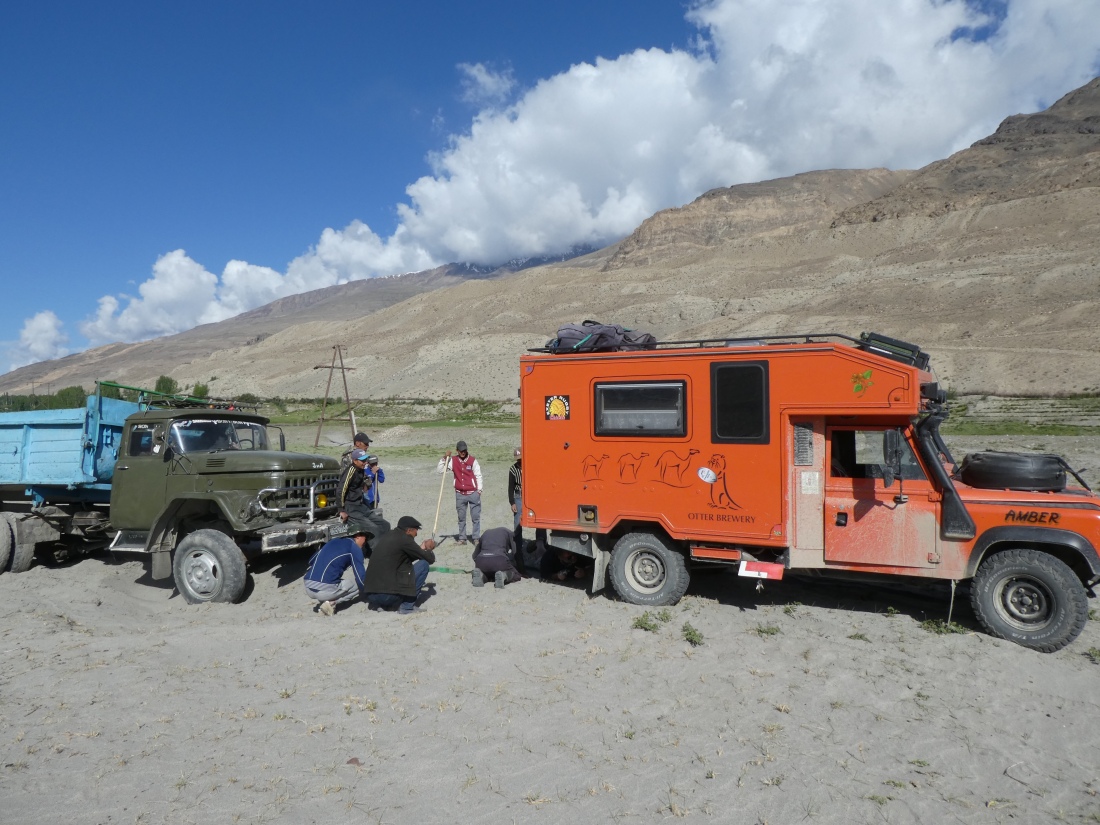 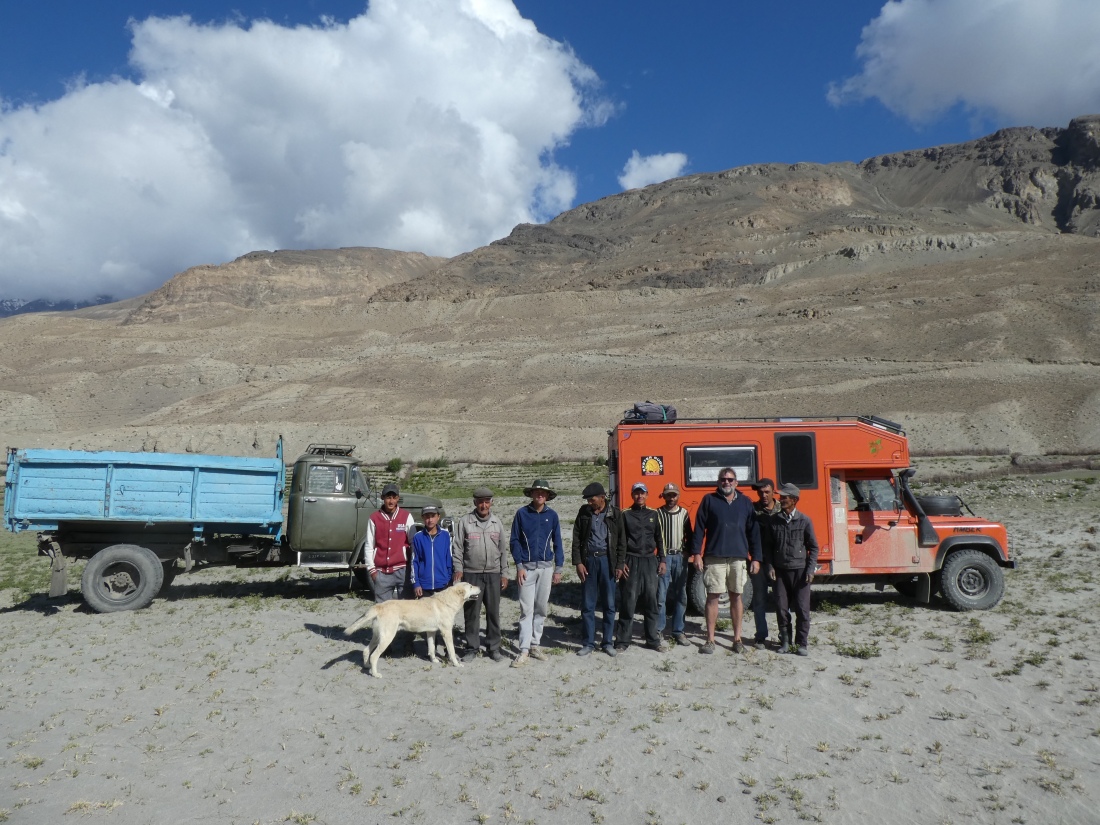 With 82 hp, 4wd ,low range and diff locks engaged along with two Otters,two Collies,and six Camels ,out she comes onto the hard surface with lots of whooping and hollering from the crowd of on lookers!

After finding a wild camping spot off the road we settled down for the night to be waken by this stunning view of Afghanistan on the other side of the valley the next day.With sunshine illuminating the fields of crops all ripening at different times it made a really colourful sight worthy of any art gallery.

Crops being harvested by hand field by field as was done in England 100 years ago! this shot was taken by Sue and her fab new camera which was able to zoom into the other side of the valley and pick out these black clothed Afghanis working away ! 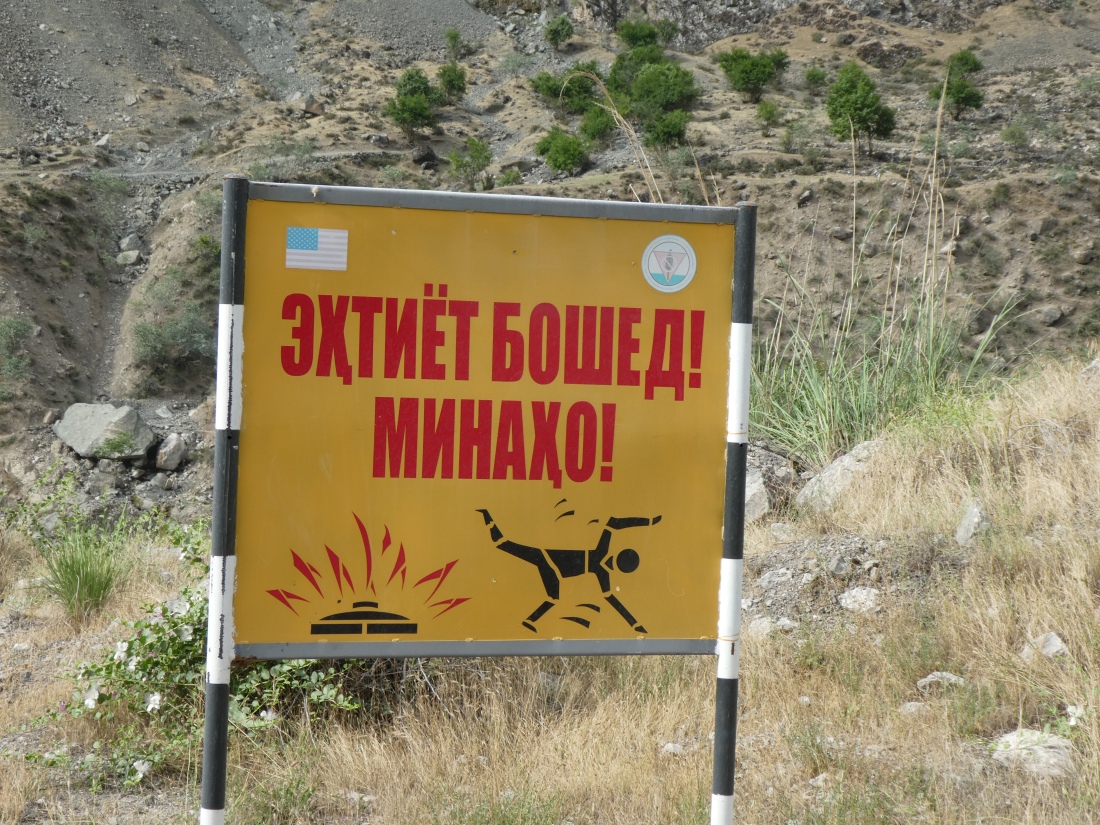 This one says it all ! It kept us on the straight and narrow with a reminder that this area is mostly safe if you don’t wander off where you shouldn’t which is what happened last year to a group of cyclists who were captured by the Telitubbies, oops I mean Taliban and murdered ! 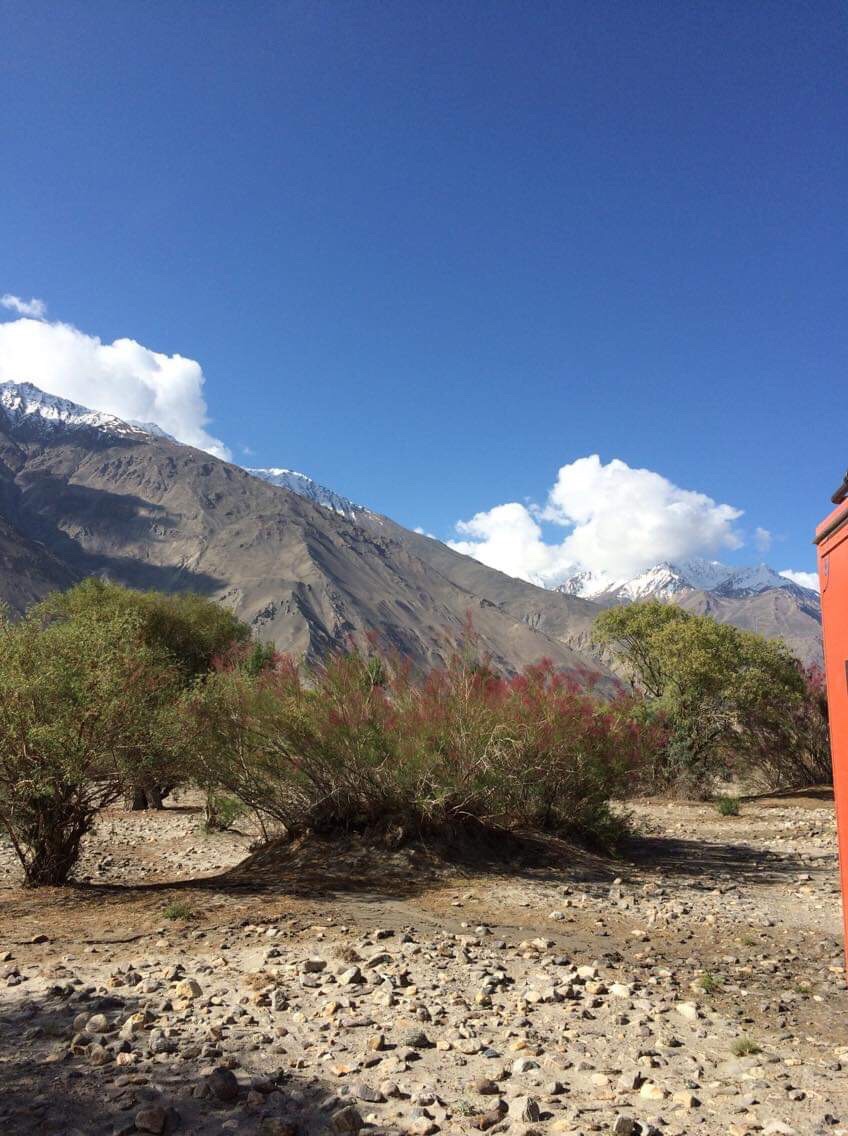 Again running along the valley with Pakistan and the Hindu Kush on opposite side.Didn’t realise we were so close until looking at a map! 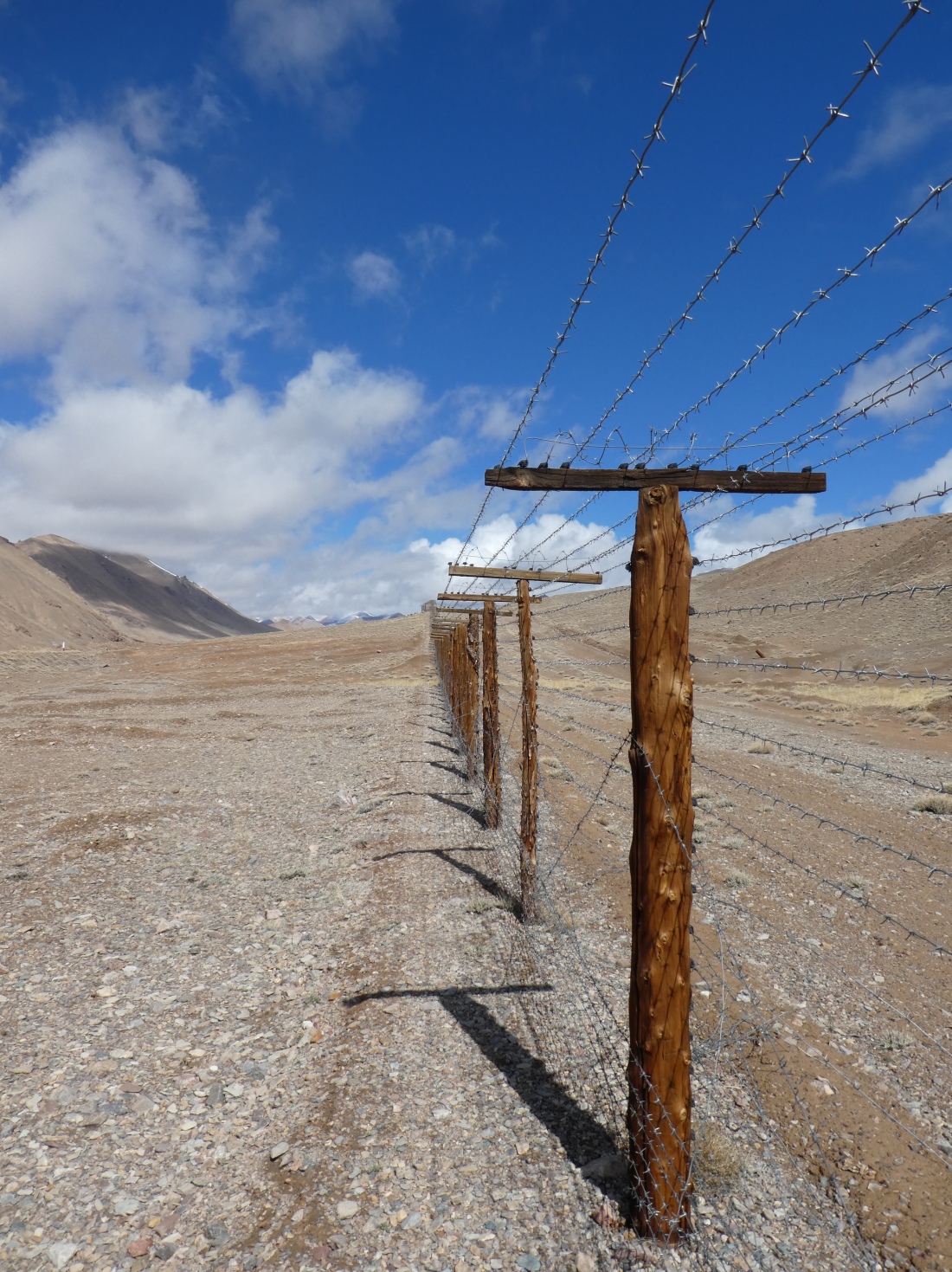 Several shots of the road up from the Wakhan valley which don’t really do it justice as it was the most amazing drive with very steep,rough tracks and stunning views! 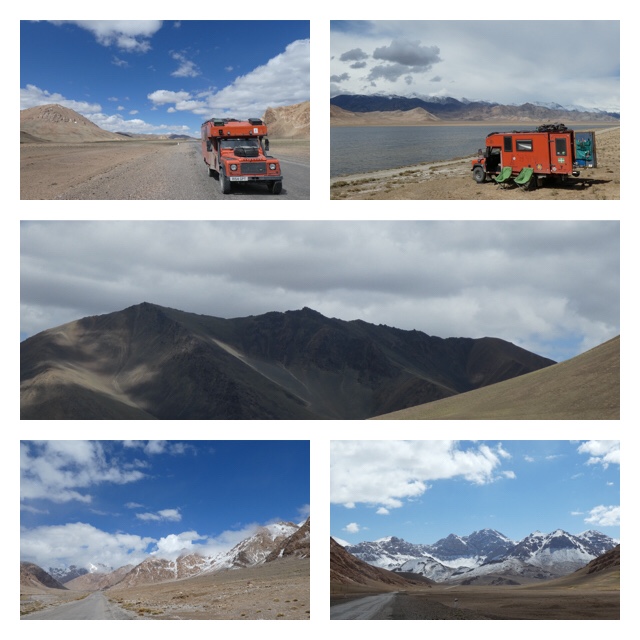 At the top of the pass !

If anyone has been at altitude for a while will also confirm it effects the body in different ways the most obvious being the need to pee! Normally a 2/3 times a day I was peeing about 8/9 times but keeping fluid levels up to avoid dehydration. 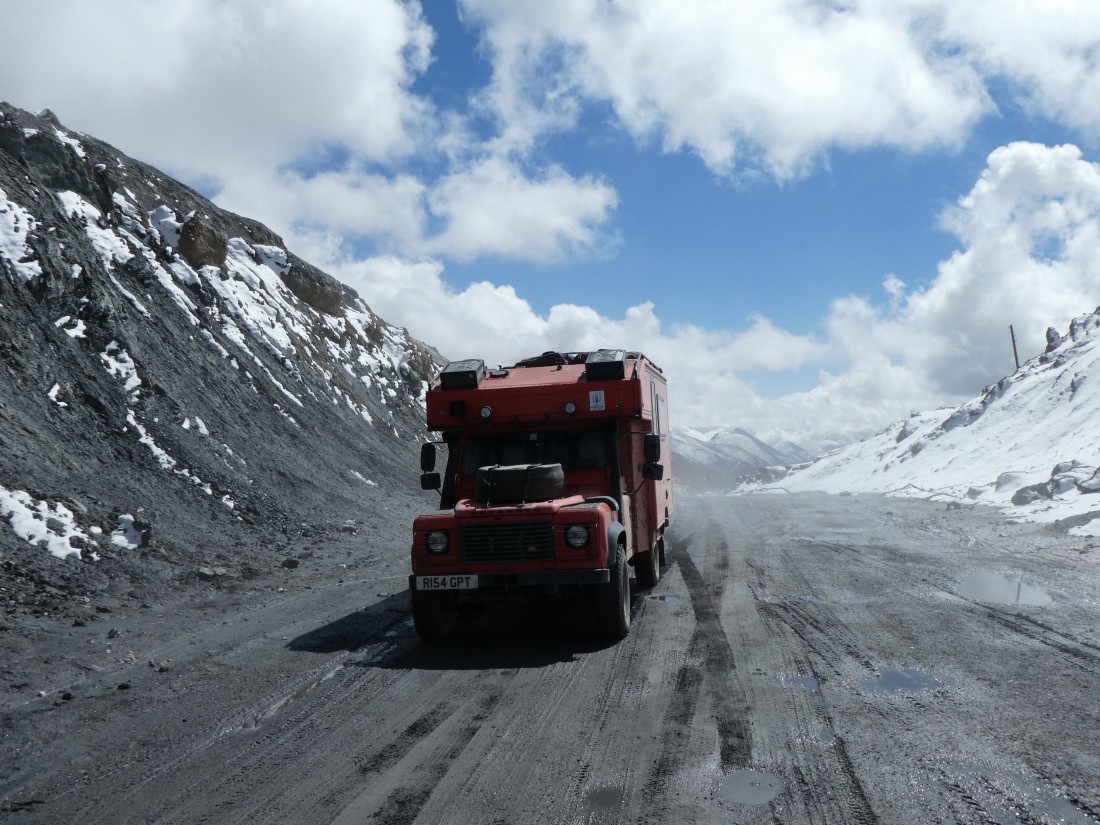 And back down the other side time for some Amber TLC!

Checked gearbox oil leak as I was convinced oil leaking from oil cooler pipes and thinking it would not be a good place to have transmission failure turned out all ok but satisfying to know I needed have been worrying again ! 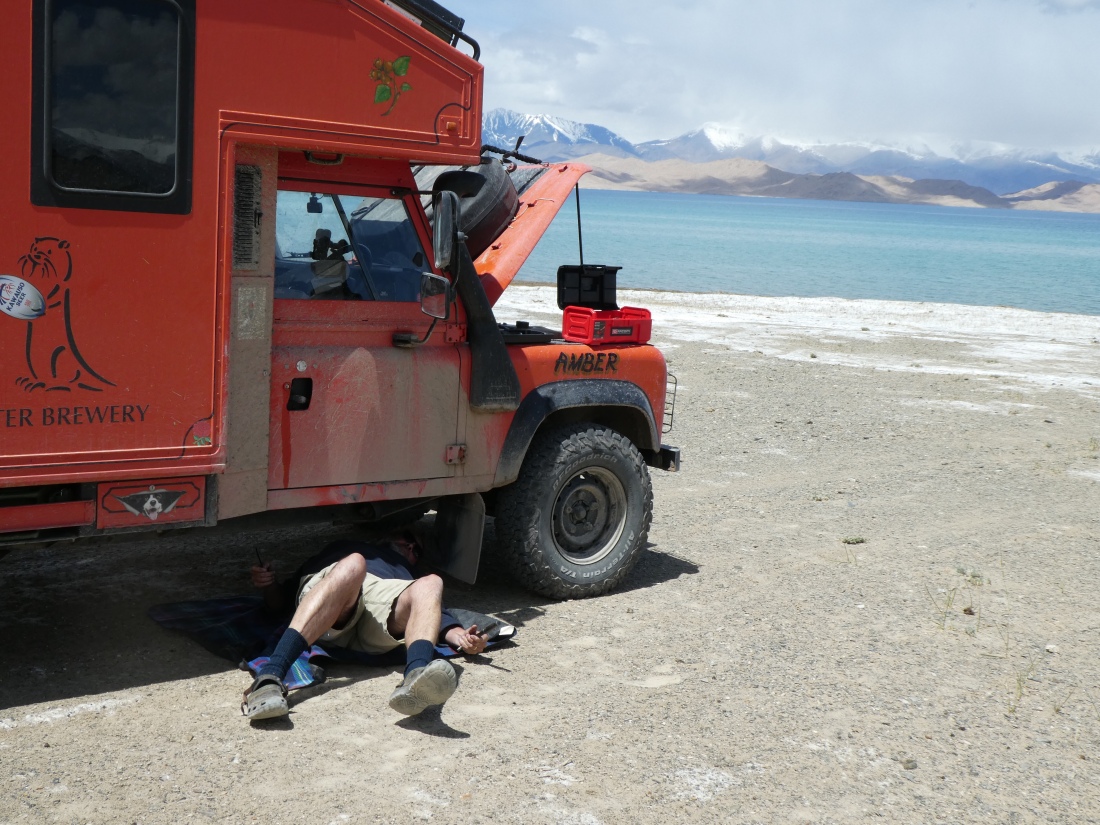 Still chasing the brake squeal which was now coming from the last wheel to be checked cleaned and reassembled in the desert sands with the help of our air bag jack along with std jack which was sinking in the sand! 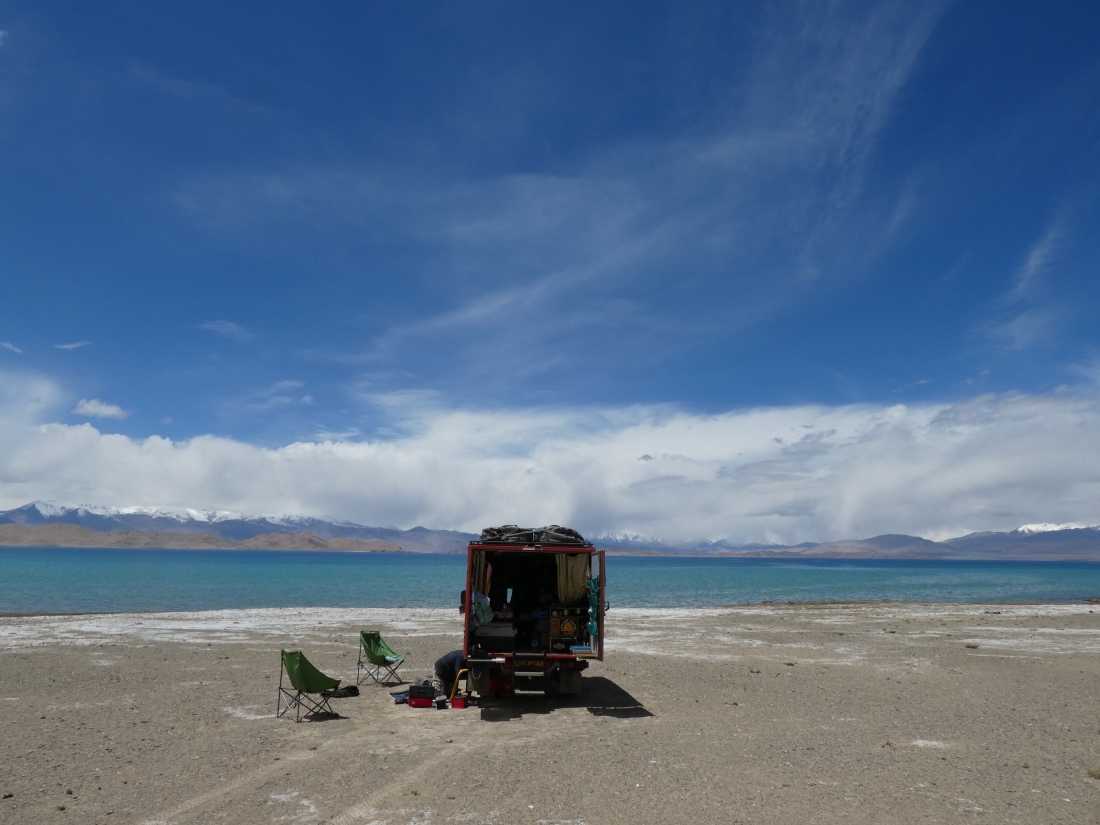 Before our arrival in Osh I thought Amber deserved a birthday treat as she had been through some messy places and was looking a little grubby! 

All that was needed next was a celebratory pint or two with thoughts of Glastonbury happening as we supped our beer!

Met these crazy French guys on motorbikes and had a great night with plenty beer and Pizza where I realised I could still understand and speak French which got better the more beers we had Equip extraordinaire! Allez les Blues! But not too much

Our next stage is onto Bishek to apply for our Mongolian visas ! Wish us luck,

3 thoughts on “The Pamir Highwayo”